We picked the brains of Director Nick Turner for this edition of Insights with FoodClean. Nick was very eager to share some fantastic advice into how and why to reduce dependence on the 25-litre drum for transporting concentrate chemicals around a food factory.

“The only reason cleaning teams still use 25-litre drums is because they are more convenient,” says Nick. “However, convenience doesn’t necessarily mean efficiency, so there’s a better way to carry out this crucial process.” 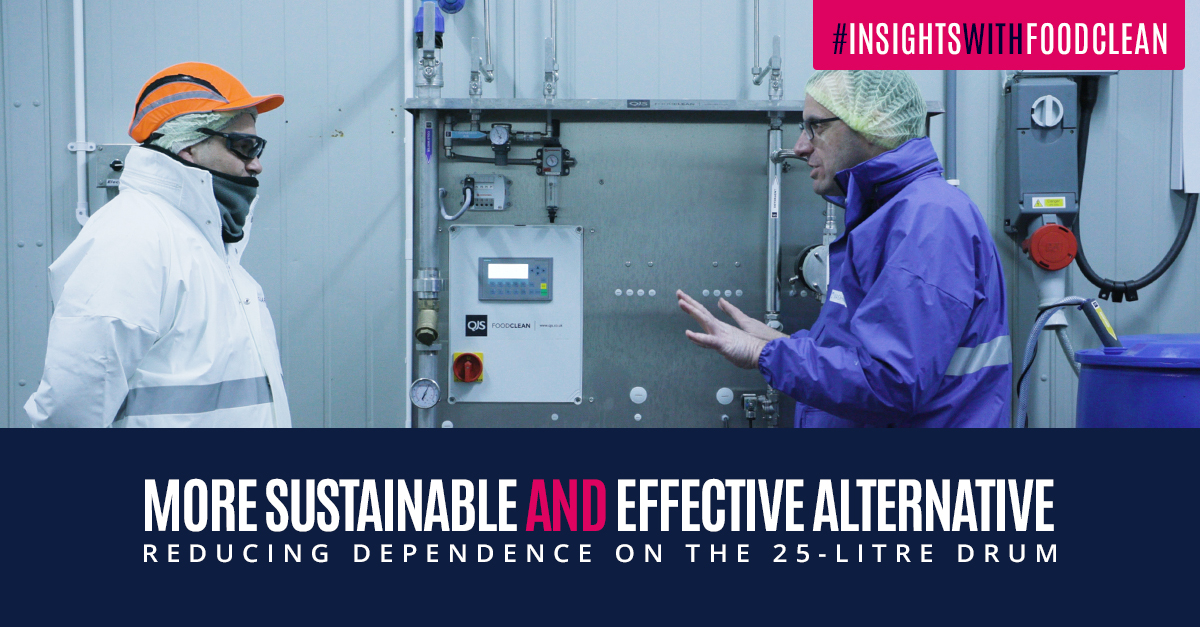 Nick pointed out that each drum is constructed from more material than 300 single-use drinking bottles. When you add up how many of these drums are used across Europe, it comes into the millions each year. Though companies have a clear conscience because they often send them to be recycled, the real problem is that using them means they need to be made in the first place. Progressing beyond 25-litre drums is something that Nick and the team here at FoodClean are dedicated to making possible through innovative food hygiene systems.

Nick says: “Not only are 25-litre drums terrible for the environment, but they are also dreadfully labour intensive, dangerously heavy, and bring operators into close contact with the hazardous concentrate chemical. They need to be cleaned prior to recycling, which takes up countless labour hours, plus huge volumes of water are required to get the job done properly. In many cases, the drums aren’t even sent to be recycled, which means significant amounts of wasted plastic and old drums taking up space within a food factory. This simply doesn’t have to be the case.”

Using chemical drums can also lead to wasted product. At a particular factory, it was found that nearly every drum had 200-300ml of concentrate chemical left in the bottom. This was because dribbling the last bit out was seen as too time-consuming for the cleaners, which meant wasted chemicals and the accumulation of empty drums that never got sent to a recycling facility.

“That’s where ChemFlow comes in, as it allows factories to move away from this costly and unsustainable system,” explains Nick. “An installed chemical storage system involves large bunded tanks being placed on site that are connected directly to the ChemFlow unit. The unit then draws the chemical concentrate directly from the tank, dilutes it at an accuracy of +/- 0.1%, and supplies it in dilute form to the operator in the factory. It’s faster, greener, more effective and is helping food manufacturing businesses to significantly raise their levels of production whilst slashing their carbon footprints.”

We’re sure you’ll agree that Nick makes a lot of sense when he says that food factories need to move away from using 25-litre drums and adopt the innovative ChemFlow approach, which greatly supports sustainability and maximises profitability. Once installed, the drum system swiftly becomes a thing of the past.

Get in touch for more insight

We’re always ready to offer expert guidance and tailored recommendations to help you run a cleaner, leaner and greener factory. To find out more, please get in touch on +44 (0) 1522 703703 or fill in our contact form.